There are no upcoming events.

Pistols are not specifically prohibited in the UK. The 1997 Acts prohibited "short" firearms, with a barrel less than 12 inches (30cm) or a total length less than 24 inches (60cm) (with the exception of muzzle loaded pistols).

Although this knocks out most pistols, it permits Longarm Pistols derived from Olympic Free Pistols, as their design makes their barrels twice the length of a normal pistol barrel and the overall pistol is more than 24 inches (60cm) long.

Free Pistols are shot over a range of 20 metres indoor and 50 metres outdoor, which for a pistol is no mean feat! The extreme range for most pistol disciplines is 20-25 yards. As a result they have the exceptionally long barrels mentioned previously and are single-shot with no magazine to ensure the action is as rigid as possible with minimal moving parts for ultimate accuracy.

Free Pistol is not for the faint hearted, and is best approached after developing a good level of competency with target air pistols at 10 metres.

Also, due to quirks of British firearms law, it is not possible for a club to buy a longarm pistol on the club firearm certificate. This unfortunately means anyone wishing to try it has to buy their own rather than starting on club guns. This is another reason why extensive experience with Air Pistol is desirable and a good lead in to Longarm pistols. 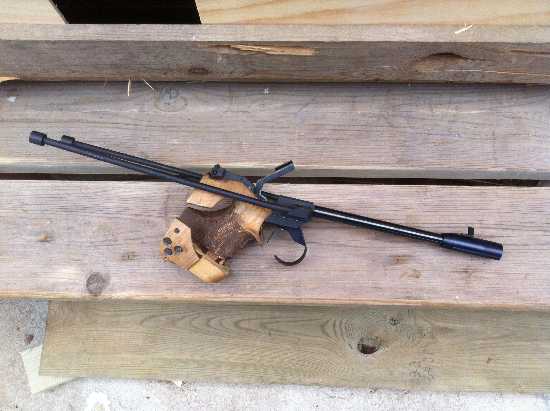